A Footnote to History: Eight Years of Trouble in Samoa, 1892 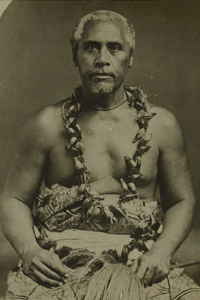 Summary: Fascinating not only as an account of Colonial skulduggery and duplicity but also as a background to Stevenson’s great South Seas tales – “The Beach of Falesa” and The Ebb-Tide – this is possibly RLS’s most unjustly neglected book.

Immediately alert to the variety of South Sea culture and the damage done to it by rapacious whites, RLS quickly became passionately interested, and involved, in the attendant political machinations.

These involved the three colonial powers battling for control of Samoa – America, Germany and Britain – and the indigenous factions struggling to preserve their ancient political system. It is a tale as old as Columbus and as new as this morning’s papers.

RLS was squarely on the side of the Samoans fighting for their preferred king, Mataafa – to the extent of participating in raids and skirmishes with them – while the foreign powers insisted upon imposing a puppet ruler; a type of conflict which is all too familiar today.

The book covers the period 1882 to 1892 and even-handedly analyses the “elements of discord”, both native and foreign, before pitching in to current events. Stevenson arrived in Samoa in 1889, and his on the spot involvement gives the narrative the immediacy of front-line journalism, which is precisely what it is. The events of more than a century ago come alive again from the very first sentence: “The story I have to tell is still going on as I write […. ] it is a piece of contemporary history in the most exact sense.”