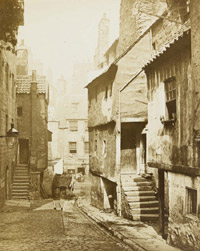 Edinburgh: Picturesque Notes is a series of essays describing different areas of Edinburgh: the Old Town, the Parliament Close, Greyfriar’s Kirkyard, the New Town, the villas in Morningside, Calton Hill and the Pentlands.

Stevenson discusses how Edinburgh is a doubled city of contrasts often placed one beside another. The city is split between the old and the new, the rich and the poor, and the city and the country.

In some passages he idealizes the city’s beauty with a nostalgic longing for the past. In others, particularly the chapter on “Legends”, he highlights Edinburgh’s darker, more gruesome history. For example, he refers to Deacon Brodie, Major Weir and the plague.

Stevenson’s essay is often tongue-in cheek. For example, he complains about the Edinburgh weather:

“[t]he delicate die early, and I, as a survivor, among bleak winds and plumping rain, have been sometimes tempted to envy them their fate. For all who love shelter and the blessings of the sun, who hate dark weather and perpetual tilting against squalls, there could scarcely be found a more unhomely and harassing place of residence “ (p. 271).

At the end of Picturesque Notes, Stevenson offers his essays as a reminder to the “Edinburgh emigrant, far or near of a few home pictures. It would be pleasant, if [the reader] should recognize a house where they had dwelt, or a walk they had taken” (p. 335).