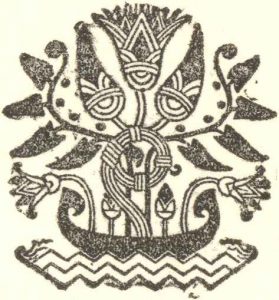 Note: The essays in this volume of travel writing were not included together by Stevenson. Nevertheless, Essays of Travel (London: Chatto and Windus, 1905) is included on the RLS Website because it contains some of the author’s travel essays that have not been collected together elsewhere. This volume will be particularly useful for those who wish to read more about travelling in Stevenson’s footsteps.

The essays in this volume are as follows:

“The Amateur Emigrant from the Clyde to the Sandy Hook” (1895)
You can find more information about this essay in The Amateur Emigrant (1895), where it was previously published as the first section of the work. In fact, this first section was ready for publication in 1880, but was withdrawn from publication until 1895. The second part of the essay was first published as “Across the Plains” in 1883 and later as part of a volume of travel essays, Across the Plains, in 1892. “The Amateur Emigrant” describes RLS’s travels on board the Devonia from London to New York in August of 1879.

“An Autumn Effect” (1875)
This essay describes RLS’s walk in Buckinghamshire through the Chiltern Hills in October of 1874. For more information, you can also read the page devoted to Chiltern Hills in the Footsteps section.

“A Winter’s Walk in Carrick and Galloway” (1896)
This essay describes the walking tour that RLS took through Carrick and Galloway from 8 – 17th January 1876. He toured Ayr, Maybole, Girvan, Ballantrae, Stranraer, Luce and Wigton. For more information, you can also read the page devoted to Dumfries & Galloway in the Footsteps section.

“Forest Notes” (1876)
From 1-19 April 1875, RLS and Bob Stevenson stayed in Barbizon, France. RLS returned there in August of 1875 with Bob and his friend Walter Simpson. This essay describes RLS’s experiences in Barbizon, as well as in Grez, the forest of Fontainebleau and nearby villages. For more information, you can also read the page devoted to Barbizon & Grez in the Footsteps section.

“A Mountain Town in France” (1896/97)
This essay is sometimes included in editions of Travels with a Donkey (1879). The essay describes RLS’s stay in Monastier before he embarked on his walking tour of the Cevennes in September of 1878. For more information, you can also read the page devoted to Cevennes & Monastier in the Footsteps section.

“Random Memories: Rosa Qua Locurum” (1896)
In this essay, RLS remembers the literature that inspired him as a child, such as Robinson Crusoe (1719) and The Swiss Family Robinson (1812). He remembers also being fascinated by the religious texts that his nurse Cummy used to read him, and remarks on the importance of reading: the reader can be fully absorbed in the text he has chosen.

“The Ideal House” (1898)
In this unfinished essay, RLS outlines his theory on what would make the perfect house, proposing ideal layouts and rooms.

“Davos in Winter” (1881); “Health and Mountains” (1881); “Alpine Diversions” (1881); “The Stimulation of the Alps” (1881)
These four essays describe RLS’s first winter in Davos, Switzerland where he was sent for his health. He stayed in Davos from 4 November 1880 – mid-April 1881, and returned for his second visit in October of 1881. The essays indicate he found Davos stifling and depressing, although in “Alpine Diversions” he does discuss the way he and other convalescents amused themselves: playing in a band, performing plays, skating and tobogganing. For more information, you can also read the page devoted to Switzerland in the Footsteps section.

“Roads” (1873)
RLS planned this essay during walks he took at Cockfield Rectory, Suffolk when he visited in August of 1873. “Roads” was his first paid contribution to a periodical. In the essay, the “road” is a kind of symbolic companion or means of theorizing the choices we make in life. RLS also discusses the merits of the English landscape. For more information, you can also read the page devoted to Cockfield & Suffolk in the Footsteps section.

“On the Enjoyment of Unpleasant Places” (1874)
In this essay RLS describes his experiences at Wick in 1868 when he was training to be a lighthouse engineer. Stevenson found Wick to be a harsh and inhospitable place, but nevertheless, he found a means of enjoying the countryside by taking pleasure in the small things. For more information, you can also read the page devoted to Highlands & Islands in the Footsteps section.

Image from RLS, Essays of Travel (London: Chatto and Windus, 1905).