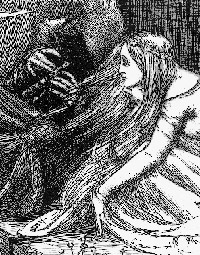 Read the Virtual Book
Fables Contents
“The Persons of the Tale”
“The Devil and the Innkeeper”
“The Penitent”
“The Yellow Paint”
“The House of Eld”
“The Four Reformers”
“The Man and His Friend”
“The Reader”
“The Citizen and the Traveller”
“The Distinguished Stranger”
“The Cart-horses and the Saddle-horse”
“The Tadpole and the Frog”
“Something in It”
“Faith, Half-faith and No Faith At All”
“The Touchstone”
“The Poor Thing”
“The Song of the Morrow”

“The Persons of the Tale”

Captain Smollett and Long John Silver step out of the pages of Treasure Island to discuss the role of the author: who is his favourite character? Does the author need both a villain and a virtuous character to write a good story? They debate about how well their own characters will fare in Treasure Island when they are recalled to the story by the author beginning to write chapter 33.

The ship is sinking, but the Captain’s philosophy is that life is dangerous and all men will die anyway: how it happens doesn’t really matter.

A traveller wishes to smoke his pipe but has only two matches, the first of which does not light. He then imagines that any fire in the woods could burn quickly, devastating the flora and fauna. When his second match fails to light he is relieved – he can’t smoke, but at least he will avoid the possibility of a forest fire.

“The Sick Man and the Fireman?”

A sick man refuses to be rescued from a burning house, arguing only the strong should be saved. When the sick man then says the strong man’s duty is to save the weak, the fireman is frustrated by this foolishness and kills him with his axe.

“The Devil and the Innkeeper”

The innkeeper vows to thrash the Devil who has been staying in the inn. When the Devil says that it is his nature to do wrong, the innkeeper hangs him instead.

A lad weeps for his sins, and a man tells him he must be very idle. When he next sees the lad, he is weeping because he is hungry. If the lad had acted rather than wept, he would not have gone hungry.

“The House of Eld”

In one part of the world, the people must wear a “gyve”, or iron shackle on their right foot, which causes them to limp and suffer from sores. Jack believes it is his mission to free the people from this curse.

He learns that a sorcerer of the House of Eld is responsible for the gyves, and that if he kills the sorcerer three times, the shackles will fall off. The sorcerer appears to Jack in three guises: as his uncle, his father and his mother. Jack kills each one, but when he returns home, he finds that everyone now has a gyve on their left leg. Furthermore, his uncle, father and mother are all dead.

Four radicals discuss how they can change the world. They want to make men equal by abolishing property, marriage, and God, amongst other things. In the end, they suggest this change can only be effected by abolishing mankind.

“The Man and his Friend”

When a man and his friend die, they are summoned to be judged in heaven. The Justice of the Peace asks them about a quarrel they had in life. The man says his friend spoke about him behind his back and admits his friend always had a “nasty tongue” (p. 287). Frustrated that the man chose his friends so foolishly, the Justice sends him to hell.

The reader despises an impious book. The book tries to reason with the reader, arguing that he didn’t have to buy the book. The book then tells him a fable about how all men die, whatever they do. The reader thinks this is a dismal fate and when the book calls him impious, the reader burns the book.

“The Citizen and the Traveller”

A stranger from another planet comes to Earth. A great philosopher is sent to explain and show the Earth to him. Despite the arguments of the philosopher, the stranger finds the trees more interesting and praiseworthy than the people.

“The Cart-Horses and the Saddle Horse”

“The Tadpole and the Frog”

The missionary never believed in the tales of the natives until one day he meets with the beings Akaanga and Miru and sees their rituals of death. He vows to stand by the pledges he made as a missionary, even though “there is something in it [the native’s tales] after all” (p. 294).

“Faith, Half-Faith, and No Faith at All”

Many years pass. Eventually, a man gives the elder son the touchstone. He returns to claim his bride, but finds that she has married his brother. When he looks in the touchstone, however, he realizes that he has made a lucky escape – the touchstone reveals that his brother and wife are soulless and empty.

A poor and ugly fisherman would like to have a wife. One day, “the Poor Thing”, a strange being that will one day be part of his son, comes to visit him. The Poor Thing promises to help him find a wife so that the son can be born. They visit the spirits of the dead, who give him this advice: “the way is plain before all like the grooves of a launching” (p. 306). They also give him a rusty horseshoe, and when the man wonders what to do with it, the Poor Thing says “one thing is as good as another in this world; and a shoe of a horse will do” (p. 306).

The man goes into town and the Earl’s daughter wants to buy the horseshoe. The man refuses, saying he came to the town to find a wife. The Earl also tries to buy the horseshoe, but the man refuses, insisting he is doing what his ancestors had done. The Earl begins to rethink his own philosophy, and comes to believe that there are neither better nor worse reasons for doing anything. On this basis, he thinks his daughter should marry the man. The Poor Thing briefly comes to her in a vision, and she accepts the proposal.

Later, a son is born, and the Poor Thing is part of him.

“The Song of the Morrow”

The King of Duntrine has a daughter who is very beautiful. However, she has “no thought for the morrow, and no power upon the hour, after the manner of simple men” (p. 314).

One day she meets a crone on the beach who tells her she can no longer live like simple men. The daughter returns home and thinks for nine years about how she can have “power upon the hour”. She meets with the crone again, who is dancing to the pipes and who says her own hour of power has come. The crone turns to nothing but seaweed.

The daughter then meets the man who has the power of the hour. For nine years he plays the song of the morrow on his pipes. When she asks to see the power, she finds there is no man there, just clothes and the pipes.

The daughter goes to the beach again and sees herself walking by the shore, with “no thought for the morrow, and no power upon the hour, after the manner of simple men” (p. 314).