Records of a Family of Engineers, 1896 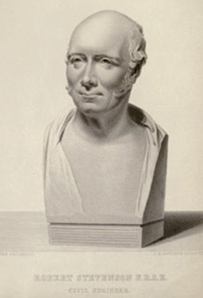 Summary: Stevenson was working on (what would be posthumously called) “Records of a Family of Engineers” from the early 1890s until his death. This unfinished piece focuses on RLS’s grandfather, Robert Stevenson (1772-1850). “Records” is a discussion of the Stevenson family history and their achievements in lighthouse engineering. For more information about the Stevenson lighthouses, see the lighthouses page in the Footsteps section.

In the first section, RLS investigates the family name. He traces its history and the people who bore the name from the thirteenth century to the nineteenth, concluding:

“on the whole, the Stevensons may be described as decent, reputable folk, following honest trades – millers, maltsters, and doctors, playing the character parts in the Waverley Novels with propriety, if without distinction; and to an orphan looking about him in the world for a potential ancestry, offering a plain and quite unadorned refuge, equally free from shame and glory” (“Records of a Family of Engineers”, The Works of Robert Louis Stevenson, Swanston edn vol xvi [London: Chatto and Windus, 1911], p. 7).

RLS then discusses his family ancestry through to Robert Stevenson and his involvement with the Northern Lighthouse Board. RLS details minutely the building of the Bell Rock Lighthouse, one of the most famous of the Stevenson lighthouses.

According to William Gray, Stevenson relished the opportunity to delve into his family history: “the pleasure Stevenson took in working on the biography of his grandfather was derived not only from its genre, but from the opportunity it gave him to go back to his Scottish roots, with which he, like so many another expatriate Scot, seems to have become obsessed. From Samoa he badgered his friends and family back in Scotland to follow up his hunches and leads about the complex history of the Stevenson family” (Robert Louis Stevenson: A Literary Life [Basingstoke: Palgrave, 2004], p. 157).