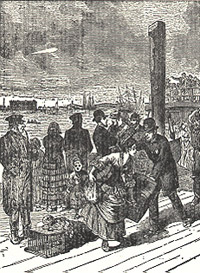 Stevenson’s journey to late nineteenth-century America was an immersion course in the privation and misery of emigrant steam and rail travel. It was a chastening corrective to Stevenson’s romantic view of the New World. “For many years,” Stevenson explains in The Amateur Emigrant, “American was to me a sort of promised land.” America had, moreover, the added appeal of release from constraint and convention: “The war of life was still conducted in the open and on free barbaric terms” (p. 105).

The emigrants he observed, however, were hardly brave seekers of the golden land of democracy and equality; they were largely life’s failures. “The more I saw of my fellow passengers,” writes Stevenson, the subdued enthusiast, “The less I was tempted to the lyric note” (p. 43).

Stevenson’s near-steerage accommodations on ship and the cramped, airless, and miserable circumstances of the emigrant train, affect not only his personal views but his writing: his experiences result in a sharpened prose style.

The decidedly grim penultimate chapter of The Amateur Emigrant, “Despised Races,” examines racial hatred toward both the Native American, “over whose own hereditary continent we had been steaming all these days” (149) and the Chinese, confined to their own rail car on the train and, like the Native Americans, frequently maligned by fellow passengers.

This dismal tone ultimately yields to something more upbeat as the train moves into California. Stevenson insists on the hopeful prospect of the dawn to strike his final note. “The day was breaking . . . everything was waiting, breathless, for the sun. . . . and suddenly . . . the city of San Francisco, and the bay of gold and corn, were lit from end to end with summer daylight” (157). Quotations from From the Clyde to California, Robert Louis Stevenson’s Emigrant Journey, ed. by Andrew Noble (Aberdeen: Aberdeen University Press, 1985).

The Amateur Emigrant shows Stevenson as a travel writer who focuses on more than the natural landscape and personal reflections, although he does that. He also writes of the common people he meets, and in doing so he engages in a good deal of social criticism.

As an “American” text, The Amateur Emigrant captures a forward-looking optimism, an appreciative regard for the spirit of democracy, and the responsibility to speak critically of late nineteenth-century American society.

This summary by Wendy Katz has been extracted and slightly revised from Wendy Katz, “Whitman and Thoreau as Literary Stowaways in Stevenson’s American Writings,” Robert Louis Stevenson, Writer of Boundaries, ed. by Richard Ambrosini and Richard Dury, (Madison: University of Wisconsin Press, 2006).