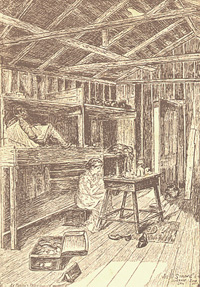 On 22 May 1880, RLS and Fanny Stevenson left for their honeymoon in the Napa Valley region of California (accompanied by Fanny’s son Lloyd Osbourne). Stevenson later described their travels in Silverado Squatters.

In Calistoga RLS uses a telephone for the first time. He also visits a petrified forest and samples Napa Valley wine. In his travels through the region, RLS meets a variety of interesting characters: other Scots abroad, for example, and Mr Kelmar who is wholly preoccupied with making money.

In Silverado Squatters RLS returns again and again to themes of national identity – he is preoccupied by what it means to his sense of self to leave his homeland behind: “I wrote that a man belonged in these days to a variety of countries; but the old land is still the true love, the others are but pleasant infidelities. Scotland is indefinable; it has no unity except upon the map” (p. 194). Indeed, despite finding California beautiful, RLS is often deeply nostalgic for Scotland and in particular, Edinburgh: “there are no stars as lovely as Edinburgh streetlamps. When I forget thee, auld Reekie, may my right hand forget its cunning” (p. 195).

RLS, Fanny, and Lloyd (and a dog Chuchu) decide to stay in the abandoned mining camp, Silverado. They “squat” in a three-room cabin. During their stay they meet the Hanson family. Stevenson describes them as “not unsimilar” to “Poor Whites” or “Low-downers” (p. 231) – they are uneducated, rude and lazy and the Stevensons find their company trying.

When Fanny and Lloyd fall ill, the party go to Calistoga to recuperate. When they return to Silverado, they find that some of their belongings have been stolen – the clearly guilty Hansons blame the theft on wild cats.

Stevenson devotes much of Silverado Squatters to describing the beautiful landscape of the Napa Valley region. He is fascinated by the sea fogs that blot out the country. He also describes the flora and fauna, in particular the surprising abundance of rattlesnakes.

RLS also details the comings and goings of the Toll House (a hostelry), near to Silverado. This is the social hub of the remote and unpopulated community.

Finally, RLS explores the mysteries and excitement that the notion of an abandoned mining camp evokes. He hears various accounts of Silverado’s mining history: that the mine had brought in $600,000, for example. Another account suggests that the mine had been an elaborate fraud: silver had never been present there. While RLS was staying their, the lease on the mine was running out. The Hansons, however, managed to jump the claim and take the mine for themselves.

For more information on where RLS travelled in and around the Napa Valley region see the page devoted to California in the “In the Footsteps” section of the website.