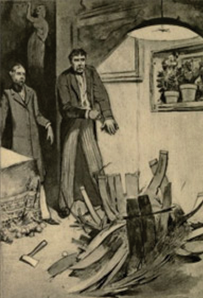 The Wrong Box (written in collaboration with Lloyd Osbourne) is a humorous tale of misunderstandings, drunkenness, attempted fraud, false identities and other mishaps.

Joseph and Masterman Finsbury are brothers. As children, both entered in a “tontine” with 37 other boys: all of the children put in a sum of money, and the last person alive would receive it all.

The elder brother, Masterman, now aged 73, lives a retired life with his son Michael, a solicitor. Joseph is still active. He is the guardian of his nephews Morris and John, and of the daughter of a friend, Julia Hazeltine. Unfortunately, Joseph took the combined fortunes of Morris, John and Julia and invested it in the leather business. The business floundered, and although he made the house over to his wards, he is still in deficit to them.

Morris vows to regain his money through the tontine. Indeed, his chances are good since of all of the participants, only the Finsbury brothers are left alive. Morris approaches Michael, hoping to make a deal to share the tontine payment, regardless of which brother dies first. Michael refuses, which convinces Morris that Michael is concealing Masterman’s death.

Morris hurries John and Joseph from where they have been staying in Bournemouth back to London, sending Julia ahead. On the train, Morris and Joseph argue about a cheque, which Joseph has taken for himself. Significantly, they do not notice an elderly man board the train dressed identically to Joseph.

The train then crashes with many fatalities. Morris and John identify Joseph’s body, but this is actually the body of the elderly man. Alarmed that they will lose the tontine if Joseph’s death is discovered, Morris and John sequester the body. They pack it inside a barrel and send it to their home in London. Morris will travel immediately to collect it and try to find a way to keep the tontine. Meanwhile, John will stay behind and pretend that Joseph is staying with him.

Meanwhile, Joseph, who had long wished to escape the company of his nephews, awakes from the train crash unharmed. He manages to gain first class passage to London. Michael happens to be on the same train with his friend Mr Wickham, but when he spots Joseph, he avoids him by ducking into the baggage car.

There, among other packages, is Morris’s barrel containing the body, and also an enormous crate addressed to a William Dent Pitman. As a joke, Wickham switches all the address labels: Morris will now receive the crate and Pitman will receive the barrel – everyone will receive the “wrong box”.

Later, in London, the crate is delivered to Morris’s residence. Julia is distressed, insisting Morris told her to expect a barrel. Mr Gideon Forsyth, a barrister and friend, happens by and helps her with the crate. They open it (and fall in love in the process) and find a statue of Hercules. When Morris arrives home he is horrified by this catastrophic mixup and hurries to Waterloo station, cursing Julia. Shocked by Morris’s ungallant behaviour, Forsyth insists that Julia stay with his Uncle, Mr Edward Hugh Bloomfield.

When Morris arrives at Waterloo he learns that William Dent Pitman picked up the barrel. Enraged by the fact that he has lost his hopes for the tontine, he destroys the statue. He then attempts to forge Joseph’s signature on the cheque, but the bank will not accept it since it has already been cashed! Although he is certain that Pitman has cashed the money, the reader learns it was actually Joseph himself.

Meanwhile, Pitman, an artist and art teacher, is distraught over the loss of the Hercules statue. Uncertain what to do next, he calls on his solicitor, Michael. They open the barrel and are horrified to find the body inside. Michael, who at this point is inebriated, comes up with a plan. He delivers his piano to Pitman’s house and they put the body inside. Using disguises and aliases, they call on Forsyth and ask him to help them with a breach of promise case. They send him on a wild goose chase to Hampton Court and once he leaves, they deliver the piano to his house.

Later, Michael bumps into Joseph, who tells him his story. Michael resolves to help Joseph, and also to frighten Morris; he visits him and pretending to be drunker than he is, suggests that he may go to Scotland Yard. He only means to confuse Morris, not yet realizing that Morris believes the body in the barrel to be Joseph’s.

When Forsyth returns from his fruitless trip, he is horrified to find the body in the piano. Resolving to get rid of it as quickly as possible, he pretends to be a struggling musician, Jimson. He rents a houseboat with the pretence that he is writing an opera. He will have the piano delivered and then will push the body overboard so that no one is the wiser. Unfortunately, his uncle’s houseboat is anchored just next door.

Julia now accidentally becomes trapped on Forsyth’s houseboat. He is forced to explain about the dead body and both his uncle and Julia pledge to help him. When the piano has still not arrived, the three become concerned that the police are involved. They decide to hide in the bushes: if the piano comes, they will step out and take it, but if the police come they will slip away.

The piano has been delayed because the devious Seargeant Brand has swindled the carrier cart’s driver, riding off with all of the goods. When the three concealed in the bushes ask Brand if he has seen the cart, he says no and speeds away. The three realize that he was in fact driving the cart, and has taken with it the piano. Relieved that they are free of the body, Forsyth and Julia plan to marry.

Morris, increasingly desperate and convinced that Pitman has cashed the cheque, places an ad in the paper asking Pitman to meet him. Pitman arrives with Michael and Forsyth also happens to be there. This meeting leaves everyone in even greater confusion about the body and the tontine.

Meanwhile, John has come to London (having had enough of pretending to stay with Joseph). Both Morris and John are summoned to Michael’s office. There, they find Forsyth and Joseph, who is not dead – all of Morris’s machinations were in vain, particularly when Joseph reveals Masterman is alive. Michael (who has meanwhile sorted out all of the financial business) arranges for the leather business to be made over to Morris and John with a cheque for the balance of their lost fortunes. He has also taken on Joseph’s liabilities so that he, Michael, will get the tontine regardless.

Image from RLS, The Wrong Box and The Ebb-Tide (London: Charles Scribner’s Sons, 1921).