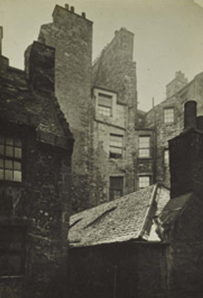 Deacon Brodie, Beau Austin and Admiral Guinea were co-written by Stevenson and W.E. Henley. They were published under the title Three Plays in 1892.

Deacon Brodie is set in Edinburgh at the end of the eighteenth century. The play depicts the revelation to Brodie’s family of his troubled, crime-ridden double life.

Brodie lives in seeming respectability with his elderly father and sister Mary. He is also on excellent terms with his Uncle William Lawson, the Procurator-Fiscal. However, he has a mistress, Jean Watt, a bastard son and has amounted vast gambling debts. He, Ainslie, Moore and Smith are responsible for the recent robberies of wealthy homes in Edinburgh.

Hunt, a Bow Street Runner (an early type of police officer), suspects Brodie’s involvement in the thefts, particularly because he recognizes Ainslie, Moore and Smith from past criminal cases. He questions them in the hopes of making an arrest, even disguising himself so he can eavesdrop.

In a sub-plot, Mary seeks Brodie’s consent for her marriage. Brodie confides to Lawson that he has gambled away her trust-money and so will have to forbid the marriage.

Later, Moore tells Brodie that he and the other accomplices are out of money. Brodie must remedy the problem by stealing from Mary’s fiancé, Walter Leslie (who saw the masked Brodie in an earlier bungled burglary attempt) and the Excise Office.

Meanwhile, Hunt bribes Ainslie to give evidence against Brodie and the others. Ainslie gives Hunt the details of the Excise Office burglary so that he can catch them in the act.

Leslie has been anxious about a break-in since the last unsuccessful attempt. He is convinced he recognizes the masked burglar and keeps watch. When the window opens, Leslie leaps on the burglar and unmasks Brodie. Jean, who has been stationed outside, gives the signal that someone is coming, and Lawson enters. Leslie protects Brodie, claiming he was keeping him company on his watch. Jean then bursts in revealing to Lawson that she is Brodie’s mistress, that she had his child, and that he is the burglar. Jean, Lawson and Leslie urge Brodie to flee. Brodie insists, however, that he must complete the Excise theft to appease his accomplices first.

Thanks to Ainslie, Brodie and the men are caught in the act when they break into the Excise Office. Brodie stabs and kills Ainslie and escapes, and Smith and Moore are arrested. He returns home, but finds Mary awake and distraught: their father has just died. Brodie confesses everything to Mary, who forgives him. Mary will marry Leslie, and both Lawson and Mary promise to support Jean and the child. Hunt arrives to arrest Brodie but when Brodie lunges at him, Hunt stabs and kills him.

Beau Austin is set in Tunbridge Wells in 1820.

Dorothy Musgrave has a fortune of £10,000 and lives with her Aunt Miss Evelina Foster and the maid Barbara. While “Beau” Austin, the famous womanising bachelor, was previously an apparent suitor of Dorothy, he now neither calls nor writes.

Austin has now returned to Tunbridge Wells so he can pay his respects to a Royal Duke who is also in town. Dorothy is enraged to learn that on his last visit he gave Barbara a necklace as a bribe so that she would leave him alone with Dorothy.

John Fenwick, an old family friend, calls and confesses his love to Dorothy. She confides that she had a love affair with Austin who then betrayed her. Fenwick vows to help her and beseeches Austin to restore her honour and marry her. Austin agrees.

Dorothy’s brother Anthony resents Austin for rebuking him. When Barbara tells him about the love affair, he vows to challenge Austin to a duel if he does not marry Dorothy. Barbara also tells Anthony about the bribe of the necklace.

Meanwhile, Austin proposes, but incensed by his earlier betrayal, Dorothy refuses. She urges him to leave the country to avoid duelling with Anthony. Anthony learns of his sister’s refusal but still plans vengeance against Austin.

In front of the Duke and the whole assembly, Anthony strikes Austin and shows him the necklace, reminding him of the bribe. To avoid further scandal, Austin glosses over the truth, arguing that he is simply a rejected suitor. He explains that he hoped to use the necklace “to make advances” through Barbara (p. 143). Overjoyed with this explanation (Dorothy’s pride was most wounded by Austin’s bribery) Dorothy throws herself at Austin’s feet. Considerably embarrassed by her behaviour, the chagrined Austin introduces her to the Duke as his future wife.

Admiral Guinea links back to Treasure Island, resurrecting the character Blind Pew, and also using the Admiral Benbow as a setting for some of the action. Arethusa Gaunt plans to marry Kit French, a privateersman. However, Arethusa’s father, John Gaunt, or “Admiral Guinea”, the former captain of the slave ship Arethusa, forbids it. Arethusa vows to stay true to Kit while he in turn will try to prove to Gaunt his worth.

Later, Pew, who was once Gaunt’s boatswain, begs Arethusa for some food and water. He then attacks her and when she escapes, he searches for the chest which is said to hold all of Gaunt’s gold. Gaunt returns and throws him out.

Pew retreats to the Admiral Benbow where Mrs Drake tells him where Gaunt keeps his chest. He also meets Kit who has been drowning his sorrows in drink. Taking advantage of Kit’s drunkenness and learning of his love for Arethusa, Pew convinces him he is Gaunt’s friend and can help to change his mind about the marriage.

Meanwhile, Gaunt explains his reluctance for Arethusa to marry: he does not want her to suffer the same pain her mother Hester did in marriage. Hester was horrified by Gaunt’s participation in the slave trade. Her sense of grief and guilt over it was gradually killing her. When 205 slaves perished in a ship commandeered by Gaunt, it was Hester’s death-stroke.

Gaunt also reveals that his chest contains not a treasure, as many believe, but Hester’s watch, wedding ring and dress – when he sleepwalks and examines the chest each night, he is contemplating the past and his beloved wife. Convinced his actions killed his wife, Gaunt is terrified Arethusa will meet her mother’s fate if she marries someone unworthy of her. When Arethusa tells Gaunt she loves Kit as much as her mother loved him, he begins to relent.

Later, Arethusa and Gaunt hear a struggle in the house and find Pew strangling Kit. The crafty Pew claims that he was going to help Kit steal the treasure from the chest, but attacked him when he learned Kit planned to run away with Arethusa. Kit refutes these lies – he believed Pew would help him win Gaunt’s approval and realized too late his only aim was to steal from Gaunt. Furious, Gaunt orders Pew to leave and tells Kit he may hang for his crimes. Arethusa promises she will give Kit up forever if only Gaunt will spare him. Preferring to die than to run in shame for crimes of which he is innocent, Kit refuses to leave. Arethusa tells him she still loves him, and that she thinks there may yet be hope for their marriage.

Kit now leaves to find and kill Pew. While Kit is gone, Pew himself enters. When he opens the chest he finds only Hester’s belongings and not the gold he imagined. He sees Gaunt sleepwalking, and attacks him with a knife while Arethusa grapples with him. Kit arrives just in time, and kills Pew.

Gaunt awakes and realizing he “was blinded with self-righteousness”, gives his blessing on Kit and Arethusa’s marriage (p. 203).