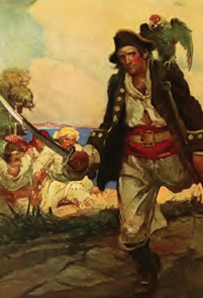 The story opens at Jim’s father’s inn, the Admiral Benbow. A wild seaman, Billy Bones, comes to stay, bringing with him a large sea chest. He frightens the locals by getting raucously drunk and singing the sea chanty:

Bones asks Jim to keep an eye out for “the seafaring man with one leg” (p. 11), who Bones fears above all else. One day, the pirate Black Dog comes to the inn and fights with Bones. Wounded, Black Dog retreats and Bones collapses. Bones confesses to Jim that he was first mate for the infamous Captain Flint, and that he knows where Flint’s treasure is buried. He also knows that Black Dog, another of Flint’s men, will bring the rest of the crew to find him so that they can seek the treasure for themselves.

Meanwhile, Jim’s ailing father dies. While the house is in mourning, a frightening and evil pirate Blind Pew, delivers the Black Spot to Bones. The Black Spot, a summons which tells Bones he has until 10PM to tell the pirates where the treasure is, shocks Bones so badly that he dies of apoplexy.

Terrified that the pirates will descend at any moment, Jim tells his mother everything. They seek assistance from their neighbours who are too frightened to do any more than send for the revenue officers.

Jim’s mother, angered that Bones never paid for his lodging, decides to take from his sea chest the money that she is owed. Jim finds a packet of documents and takes it. He and his mother hide and watch the pirates ransack the inn. At last, the pirates are chased away by revenue officers on horseback, who accidentally trample Pew to death.

Jim asks the officers to take him to Dr Livesey, who is visiting Squire Trelawney. He gives him the packet which contains Flint’s treasure map. Thrilled by the possibility of adventure and buried gold, the Squire commissions a ship, the Hispaniola. He hires a crew to seek the treasure – Jim will be the cabin-boy and Livesey will be ship’s doctor. Jim bids farewell to his mother and arrives in Bristol, where the ship is docked.

The Squire has meanwhile hired a cook for the voyage, Long John Silver, who has chosen most of the rest of the crew. Silver is a charming but morally ambiguous character who switches allegiance whenever it suits him. He has only one leg, reminding Jim of Bones’s fears. He also has a parrot named Captain Flint who constantly shrieks “Pieces of eight!”.

Jim carries a message to Silver, only to find that Black Dog is also in the same tavern! Jim’s suspicions are calmed, however, by Silver’s flattery.

Just before the journey begins, the upright and serious Captain Smollett warns the Squire and Livesey that he does not trust the crew. They all know it is a treasure-seeking voyage, although this is meant to be a secret.

During most of the voyage, his fears seem unfounded and the crew seems to be happy and efficient. One day, however, Jim overhears Silver convincing a man to turn traitor: it is clear that Silver has planned all along to wait until the treasure is aboard and then to kill everyone who hasn’t joined their mutiny. Jim even learns that Silver was the quarter-master on Flint’s ship.

Jim tells the Captain, the Squire, and Livesey about Silver’s treachery. Because of the crew’s increasing agitation as they draw close to the island, the Captain resolves that the pirates should go to shore while he plans their next move. Jim sneaks ashore and hears in the distance one of the honest men being slain at the hands of the pirates. He also sees Silver murder a man who he was unable to convince to join his mutiny.

Terrified that he will be next, Jim runs into the woods. Here, he meets the wild-looking Ben Gunn, another of Flint’s old crew. Gunn reveals that Flint had buried the treasure on the island with the help of six men, whom he had then killed. Gunn had returned to the island with a group of others three years before. When the treasure wasn’t found, the others marooned him on the island. Gunn, who is affable but slightly mad from his long solitude, has sought the treasure ever since. He now offers to help Jim and his friends if they will give him a passage off the island.

Meanwhile, the Squire, Livesey, Smollett and the few honest hands left abandon the ship, taking possession of an old stockade which Flint’s crew had built. Jim returns with his news about Gunn and finds a battle has already depleted their numbers.

Surprisingly, Silver offers a truce but the Captain refuses. Another battle leaves more dead and the Captain wounded.

Jim sneaks away, armed with a couple of pistols, and finds the little boat that Gunn had mentioned he’d made. He steers the boat to theHispaniola, where he cuts the anchor cables. Climbing on board, he sees that the pirate O’Brien is dead, and that Israel Hands is badly wounded.

Hands promises he will help Jim sail the ship safely to shore if Jim will bind his wound and bring him some drink. Jim complies, but then sees he is not as badly wounded as he claims – and that he has a knife. Once they sail to shore, Hands attacks. Jim escapes by climbing the rigging. Hands throws his knife, pinning Jim’s shoulder to the mast. Jim shoots and Hands falls to the water and dies.

Jim now returns to shore. Thinking he will surprise his sleeping friends in the stockade, he enters quietly, only to hear the piercing cry of the parrot, “Pieces of eight!” – the pirates had taken the stockade! Most of the pirates want to kill Jim, but Silver takes Jim’s side – after all, Jim can testify for them in court and help them when they return to England. However, the pirates only agree when Silver reveals he has the treasure map!

Livesey comes to treat the wounded pirates (despite their enmity Livesey believes in his duty as a doctor). Jim tells him where the ship is, and tells him that Silver saved his life. Outnumbered, Livesey is powerless to help Jim and Jim has also promised Silver not to try to escape.

Shortly afterwards, the pirates set off to find the treasure with Jim in tow. They come across the skeleton of one of the six pirates Flint killed, whose arms have been arranged to point in the direction of the treasure. Frightened by the remains, the pirates speculate whether Flint’s ghost is nearby. They remember how he used to sing

They are terrified when they hear a voice (we later learn that this is Gunn) from the woods singing that very song. Silver urges them to put their superstitions aside. When they come to the place where the treasure is supposed to be buried, however, they find it is gone.

Enraged, the pirates turn on Silver. He is saved when Livesey, Ben Gunn and another honest hand, Alasdair Gray, emerge from the trees, firing at the pirates.

Jim learns that Ben had found the treasure after all, and hidden it in a cave. Knowing this, Livesey had given Silver the map so the pirates would be distracted.

Silver, who now firmly allies himself with Jim and the others, helps to load the ship with the treasure and they sail away, marooning the three remaining pirates. During a stop in a South American port, Silver escapes, taking with him one bag of the treasure. Everyone is pleased to be rid of him so easily.

They return to England, but Jim admits that “the worst dreams that ever I have are when I hear the surf booming about its coasts, or start upright in bed, with the sharp voice of Captain Flint still ringing in my ears: ‘Pieces of eight! pieces of eight!’” (p. 231).