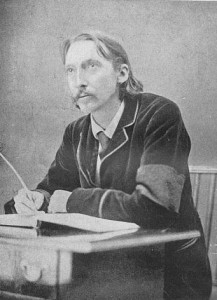 UNCOLLECTED ESSAYS, by year of publication

The following is a brief guide to first publication of RLS’s uncollected essays. While some of these essays have subsequently been published in volumes of RLS’s writings, RLS never organized these for publication in the same way that he compiled Virginibus Puerisque (1881), Familiar Studies (1882) and Memories and Portraits (1887). These essays – which are often overlooked in the RLS canon – demonstrate the huge volume of work that RLS completed in his short life. They also show his versatility as a writer, and offer a unique insight into the development of his thoughts and writing from a young man in Scotland, to the well-travelled and established author in Samoa.

‘In the Latin Quarter. No.  II.–A Studio of Ladies’. London 3: 64. Unpublished since then. Autobiographical essay.

‘The Book of the Week. Wallace’s Russia’. London 4: 92-3. Unpublished since then. Review essay.

‘The Misgivings of Convalescence’. Pall Mall Gazette (17 Mar 1881). Unpublished since then. Autobiographical essay.

‘On Some Technical Elements of Style in Literature’. Contemporary Review 47 (Apr 1885). Tus 28.Not collected until the Edinburgh Edition  (Miscellanies 3, 1895) and then in Essays in the Art of Writing (1905). Critical essay.

Apologies for analysing an aesthetic effect – it is disenchanting to be shown the mechanism of any art – the result of our limitations: an ideal analysis would reveal ‘ancient harmonies in nature’.

1. Choice of words. The material of literature is language made of finite and rigid words – writing is difficult because it is like building with toy building blocks of similar ‘arbitrary size and figure’ – unlike in other arts its elements cannot be used as mere forms but must also have meaning.

The clearest aspect of literary art is the choice and contrast of words. The creation (from these rude blocks) of fine meanings and distinctions restores ‘primal energy’ to words. This is prominent in the work of Carlyle, Tacitus and Montaigne. Addison, Cicero and Voltaire are less successful here, but are superior in another aspect…

2. The web. Arts may be divided into (i) the representative (sculpture, painting, acting) and (ii) the presentative and self-sufficient (architecture, music, dance). Each class of arts has different principles but all aim ‘to make a pattern’. Music and literature (the two temporal arts) make a pattern of sounds and pauses in time.

The literary artist weaves his meaning in phrases into a ‘knot’ (or ‘hitch’) of suspended meaning in the sentence, which is then resolved. The reader anticipates and welcomes successive phrases. This pleasure may be heightened by surprise, as in antithesis, or in suggested but evaded antithesis. The sound of the sentence should be balanced, should develop and end satisfactorily, but with variety – to give the effect of ‘ingenious neatness’.

The writer, like a juggler with two oranges, plays contemporaneously with sound and meaning: word-choices and ‘knots’ must serve the argument; cheville (filling) must be avoided. Style is synthetic: good formal organization combines with effective meaning. Attention to form adds philosophy (gives an idea of complexities and interrelationships) and wit (delight in the performance), and wit supports philosophy. Style requires formal ‘implication’ (entwining of meaning); unusual word-order can also help the argument.

The web (or ‘pattern’, or ‘texture’) is both ‘sensuous’ and ‘logical’. It is true that some books are read just for ‘the fact or fable’; some authors (Cicero, Trollope) give pleasure just in the ‘elegance of texture’ – however, in both cases, the two elements (form and meaning) are still juggled (even if one of the oranges is rotten).

In verse, pattern is provided by the metre – this set pattern makes it easier to write pleasing verse than interesting prose, where the pattern has to be invented. The greatness of the ‘true versifier’ (Shakespeare, Milton, Hugo) is in combining metre with an independent pattern of sentence structure that contrasts or combines with the verse pattern. The writer of verse is like the juggler with three oranges.

Yet verse also loses something: the balance and neatness of the prose sentence is superior to the usual loose structure in verse – compare superior organization in Shakespeare’s great prose speeches.

3. Rhythm of the phrase. Each phrase should be ‘comely’, must please the ear like a phrase in music – but the laws of this beauty are not easy to discover. Even in poetry this is not easy: the iambic pentameter line often falls into four groups of words with a variety of metrical forms: hence there are two patterns and the verse reads both ‘in fives’ and ‘in fours’. Other lines are divided into three groups of words. Polysyllables help tot create this essential variety.

In prose, The rule of rhythm is not so intricate – prose is written in longer groups (or ‘phrases’) – successive phrases differ in length and rhythm. But the rhythm must not be metrical (because this produces units of identical length with a regularity of beat but unaccompanied by the density of the short verse group). The prose writer must produce perpetual fresh variation of movement – this is the ‘third orange’ for the prose writer.

4. Contents of the Phrase. The resources of rhythm vary between different languages and different dialects of the same language – but rhythm is not essential: other formal elements can give beauty to verse and prose. In French the ‘pattern of the web’ is dominant in prose (with little space for ‘lawless melody’). However, French prose is better than English and is more clearly seen as ‘comely’. So there is another element to ‘comeliness’: the phonetic content of the phrase: the repetition, variation and contrast of sounds.

However, literature is written both for the internal ear (sounds) and for the eye (written forms), so a letter A corresponding to different vowels in English creates an additional pattern (the fourth preoccupation for the prose writer, the fifth for the versifier). Examples of sound and letter patterns in Milton, Coleridge and Shakespeare (showing a Scottish pronunciation). Comments on the change from FV, PF and BP (slight changes in articulation or voicing). The Shakespeare lines ‘The barge she sat in…’ does not show ‘colour sense’ (non-existent in literature) but a use of the word ‘purple’ in an intricate pattern of sound. Compares passages in Macauley to see if frequent repetitions of sound are significant or just normal frequencies in English. (Macauley, however, overdoes the use of sound repetition – he ‘a dauber’).

Conclusion. Hence the elements of style are: (i) (for the prose writer) creating rhythmical phrases without making them metrical; (for the versifier) combining and contrasting the pattern of feet, word-groups, meaning and metre (Point 3); (ii) artfully combining sounds (‘the prime elements of language’) into pleasing phrases (Point 4); (iii) weaving argument into a texture of phrases and periods (especially for prose) (Point 2); (iii) choosing ‘apt, explicit and communicative words’ (Point 1). Successful writing is complicated and involves great skill, combining shapes and sounds of letters (appealing to the senses), paying attention to the architecture of the sentence (appealing to the intellect).