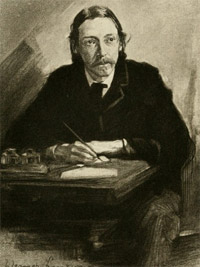 Book I. In English

XVII. Henry James; XVIII. The Mirror Speaks; XIX. Katharine; XX. To F. J. S.; XXI. Requiem; XXII. The Celestial Surgeon; XXIII. Our Lady Of The Snows; XXIV. “Not yet, my soul, these friendly fields desert”; XXV. “It is not yours, O mother, to complain”; XXVI. The Sick Child; XXVII. In Memoriam F. A. S.; XXVIII. To My Father; XXIX. In The States; XXX. A Portrait; XXXI. “Sing clearlier, Muse, or evermore be still”; XXXII. A Camp; XXXIII. The Country of the Camisards; XXXIV. Skerryvore; XXXV. Skerryvore: The Parallel; XXXVI. “My house, I say. But hark to the sunny doves”; XXXVII. “My body which my dungeon is”; XXXVIII. “Say not of me that weakly I declined”

Table of Common Scottish Vowel Sounds; I. The Maker To Posterity; II. Ille Terrarum; III. “When aince Aprile has fairly come”; IV. A Mile An’ A Bittock; V. A Lowden Sabbath Morn; VI. The Spaewife; VII. The Blast — 1875; VIII. The Counterblast — 1886; IX. The Counterblast Ironical; X. Their Laureate To An Academy Class Dinner Club; XI. Embro Hie Kirk; XII. The Scotsman’s Return From Abroad; XIII “Late in the nicht in bed I lay”; XIV. My Conscience!; XV. To Doctor John Brown; XVI. “It’s an owercome sooth for age an’ youth”

The title alludes to that used by Ben Jonson for his collection of poems, which were of mixed genre and “lesser poems of later growth” than his earlier collection Forest (1616). Stevenson is suggesting that his poems too are a varied collection and less important than his prose works, yet at the same time he is presenting himself, like Jonson, as an all-round literary writer.

The volume is divided into two parts: Book I: In English and Book II: In Scots. The poems in the first part are generally considered less interesting. Most of them are “occasional poems” celebrating an event, a friend or a place. Roger C. Lewis characterizes them as “elegant conceits, graceful eulogies and poignant epitaphs” (The Collected Poems of Robert Louis Stevenson [Edinburgh: Edinburgh University Press, 2003], p.8).

Though slight, RLS chose them from a large amount of other poetry that remained in his notebooks, so they are poems that he thought were of some interest. We might also say they serve a social function of reinforcing a network of friendships, like the elegant dedications to his friends that he wrote to all his works. Lewis sees the influence of Herrick and also of Marvell, “especially in his poems about houses and gardens and his use of rhyming octosyllabics”. David Fergus identifies three as “truly memorable”: “The House Beautiful”, “Requiem” (the last three lines of which adorn his tombstone in Samoa), and the last poem in the first part, “XXXVIII – Say not of me that weakly I declined” (“A Major Minor Poet?”, textualities, http://textualities.net/david-fergus/a-major-minor-poet/).

Another is “The Mirror Speaks”, a witty poem imagining the life and times of a mirror which was given to RLS and Fanny at Skerryvore by Henry James.

Book II is is prefaced by a Table of Vowel Sounds, which is a valuable source of information on the pronunciation of Lallans Scots in the late nineteenth century. A Note placed at the beginning of the volume is actually entirely devoted to the matter of writing poetry in Scots, so refers to Book II only, and perhaps shows how important this was for him. In this “Note” he says he feels that the Scots tongue is moribund and, while it’s still possible, “I would love to have my hour as a native Maker, and be read by my own countryfolk in our own dying language.”

Though here he seems to be celebrating a dying language, Stevenson can also be seen as affirming its right to live. By 1887 he was “a household name” and this decision to publish poems in Scots consciously revived a tradition that had lapsed. No other important nineteenth-century Scottish writer had done this (not even Scott himself). The first poem in the collection seems to confirm the introductory “Note” by imagining some future “auld professor” unable to understand the poet’s language, yet at the same time the “Maker” replies defiantly “I wrote in Lallan,/ Dear to my heart as the peat reek,/ Auld as Tantallon”. Eleven of the sixteen Scots poems are in the six-line “Burns stanza” (as in the example given below).

This second part of the volume is generally considered better than the first. These Scots poems are to be spoken, whereas the comparitively lame English poems of the first half are very much poems for the page. Colin Milton praises the way Stevenson was “able to tap the energy and inventiveness of spoken Scots”, the contemporary popular speech of the Lallans, not a literary dialect (“Modern Poetry in Scotland Before MacDiarmid”, The History of Scottish Literature, ed. by Cairns Craig, Twentieth Century, vol iv [Aberdeen: Aberdeen University Press, 1992]).

The Scots poems are mainly satirical, poking fun at the Kirk, pretension, hypocrisy and all the ways and wiles of the “unco’ guid”. “The Maker to Posterity” (the first poem in the collection) is a serious poem about the possible death of the Scots tongue, but the rest are essentially humorous. “A Mile an’ a Bittock” is a glorious evocation of a drunken stagger home late at night; “A Lowden Sabbath Morn” is a biting satire on the Kirk and kirk-goers, as is “Embro’ Hie Kirk”. But, all these Scots poems merit reading and re-reading. An especially interesting one is the plainly autobiographical “My Conscience”:

“Of a’ the ills that flesh can fear,
The loss o’ frien’s, the lack o’ gear,
A youlin’ tyke, a glandered mear,
A lassie’s nonsense –
There’s just ae thing I cannae bear,
An’ that’s my conscience.”